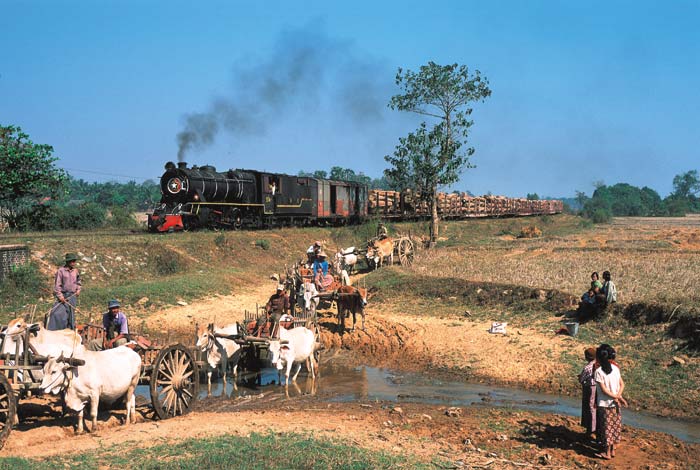 Myanma Railways run some of the most beautiful locos in the world. A small number of well-kept steam locos from Vulcan Foundry, delivered shortly after World War II dominate the (limited) steam loco scene in Burma, while cute narrow gauge steam locos are in use in Namtu on the former Burma Mines railway. Burma's railways, the "Myanma Railway", use the last Pacifics in the world. However, nobody, even the railway ministry, can guarantee to us that steam will survive until 2006. But serious problems with spare parts of diesel locomotives and two planned heavy overhauls of steam locomotives in 2005 volumes.

Burma isn't a democracy but its government will do all it can to make you feel at home. Of course, they are really only interested in earning your money. The people you'll meet are very friendly and it's all-too-easy to become a lover of Burma. Ancient ruins and pagodas, the traditional way of Asian life, rural villages, the feeling of living several decades in the past and the slow pace of life all create the unique charm of this country.

Despite the standard gauge steam locos (in Burma the metre gauge is 'standard'!) all operating in mainly flat areas, the line to Mottama is lined by big hills. Around Thaton, there are quite a lot of opportunities to get nice pictures of big pagodas, high mountains and a steam train together. Even in the flat areas you'll find plenty of good positions; palm trees, pagodas, villages and bridges can always be found somewhere along the line.

The majority of tour participants regretted that there was no time planned for visits to the ancient ruins, nice pagodas and breathtaking Golden Rock on the recent tour. On the 2006 tour we shall include some of the most interesting holy places of Burma. The tour is made for railway fans with a wider horizon, for those who like to take a look beyond the rails. 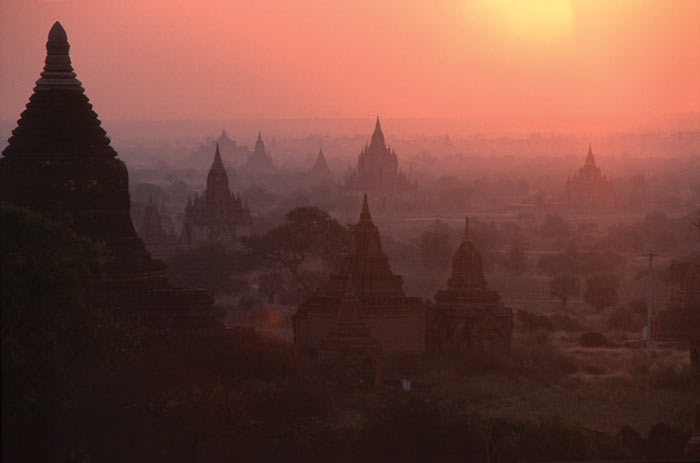 Bago (the town was previously known as Pegu) has the main shed for steam locomotives. There are two lines served, the first of which heads to Mottama, south-east of Bago. Initially it is flat but not without photographic potential. Beyond the bridge over the Sittaung river (photography prohibited), hills appear. At Mokpalin, there is a small, barely used shed with a turntable. Locos can take water here and minor repairs are still possible. The entrance to the depot is framed by a nice bridge over the railway. Further down the railway comes closer and closer to the mountains and between Thaton and Mottama the line becomes quite spectacular. There are no steep gradients, but the scenery is outstanding, especially in the afternoon with the light from the "right" side. Mottama itself has a small loco shed. Beside the regular passenger train sometimes freight trains run along the line to Yinnein or to one of the other quarries nearby.

We've ordered (and paid for) steam to haul the passenger trains 85/86. Despite handing the money over, there is no absolute guarantee of steam power for the two days concerned. During the recent tour nearly everything worked as we had requested, although we couldn't guarantee anything. From the experience of the last trips, the chances of actually having steam are close to 100 %.

The loco shed at Taungoo normally uses two steam locomotives during the peak season of the sugar harvest. The use of steam depends, like anywhere in Burma, on the availability of diesels, the availability of fuel for the steam locos and when the sugar factory demands the cane. Usually, there is a daily pair of sugar cane trains between Yedashe and Swa in the late afternoon/evening. The double track line has some nice photo positions as there is the bridge near Swa and several pagodas along the line. 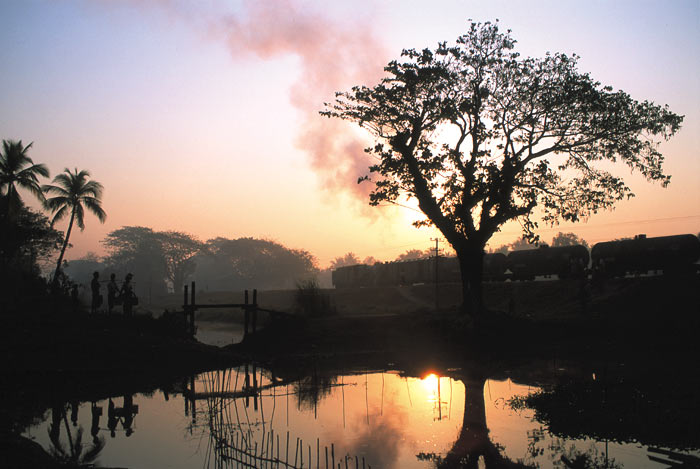 At Pyinmana there is a shed which still has three steam locomotives, but they are only in use during the sugar harvest to transport the cut cane to the sugar mill. Normally, just one loco is sufficient to bring all the cane in to the sugar mill which is about two kilometres east of Pyinmana. There are loading points at Kyihtungkan, Kantha, Ela, and Thawatti to the north, west and south. The steam locos have to share their work with diesels, so you never can say in advance which line will be served by steam. Another problem is heavy delays in running the trains, sometimes the train scheduled for 11.00 will not depart before sunset ... We spoke to the railways and organised a monitoring of the punctuality of the sugar cane trains on February 16th.

We ask the railways to delay on of the fantastic timber trains to a departure on February 15th. Fortunately they agreed - so we'll follow this train o it's way to Yangon.

Namtu is the head quarters of the Burma Mines Railways. The Namtu area is restricted owing to fighting between government troops and local tribes. Fortunately, for the last few years it has been possible to get a permit to visit Namtu while travelling in government-organized groups. The 610 mm gauge railway runs from Bawdin via Namtu to Namyao on the Mandalay - Lashio branch of Myanma Railways. Goods are silver and lead ore to the smelter at Namtu. Steam was largely replaced in the 1970s and today only two steam locos remain in working order. One is Bagnall 2-6-2 no. 42, built in 1928 and the other Kerr Stuart 0-4-2T no. 13, built in 1914. Now both are available to haul special trains along this exciting mountain railway. Beside these two serviceable steam locos, there is a recently opened small museum in Namtu with four further preserved locomotives. If you want to come with the group to Namtu, then we will need your personal and passport details three months in advance, to secure the permit.

The line is spectacular with hairpin bends, a spiral with a 540 degree curve, some reversals, rural villages, pagodas and steep mountains. The photographic potential is exceptional, be prepared and bring plenty of film! In the morning usually someone can experience some steam exhaust.

It is possible to save a place in a balloon to fly over the pagoda fields of Bagan in the morning. A place in a balloon is 240 US-Dollars. The view out of a Balloon is exciting, the feeling is extraordinary and will be a highlight of the tour. However, photographic potential for shots with pagodas and the rising sun is better from the ground. You should decide whether you want to take a balloon or stay at the ground this morning. 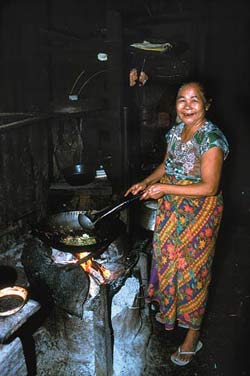 Some difficulties have to be mentioned. Timekeeping is not as important as in central Europe. Given this, the scheduled times are a declaration of intent by Myanma Railways and delays of several hours are not unusual.

Steam locos of Myanmar Railways are oil fired and supplies are variable. You should be warned that sometimes steam locos are replaced by a diesel for several days. We will try to ensure that no fuel shortage will affect our tour but we can't guarantee it. Myanma Railways bought some Indian diesel locomotives in 2000, so there is no longer a lack of diesel power and Myanma Railways can now survive without their steamers. It's only a question of time before the black beauties are retired. In the not too distant future, it will be impossible to experience real steam trains any more and only charter trains will remain.

Although the railways agreed to serve our demands it may be necessary to change the itinerary without notice to co-ordinate our tour with the available steam trains.

The standard of the hotels in smaller places is far below a Polish youth hostel. Please be prepared. Domestic fights are, sometimes, nothing for people who like safety and security.

Please note that morning trains have a higher priority than a breakfast in the hotel. So breakfast will be served as a packet box if necessary. Lunch and dinner are planed according to the situation of steam trains timetable. Please calculate some 12 Euro per day for food an beverages.

Please bear in mind that accommodation and transportation in Burma fall short of EU safety standards. Always use common sense when crossing roads and railway tracks. Farrail Tours cannot be held responsible and will not accept any liability whatsoever in the case of any accident or damage. We suggest you take out a comprehensive overseas accident and health insurance policy.

Registration period ends October 20th, 2005. Bookings after this date will be accepted, of course, but it might be impossible to organise a permit for Namtu and/or a reasonable priced flight.

Please let us know whether you are willing to join a group with less than ten participants or not. Maximum number of participants: 17.

Above prices are based on specific bookings with the respective airlines, which, given the limited flights into Burma, have to be confirmed well in advance. Your early booking is hence appreciated. 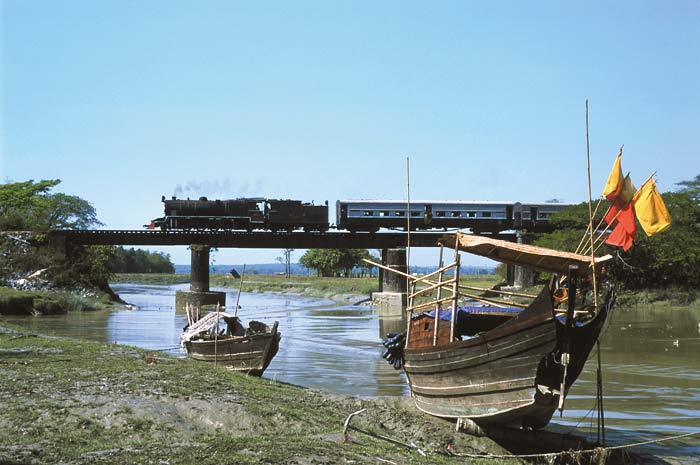