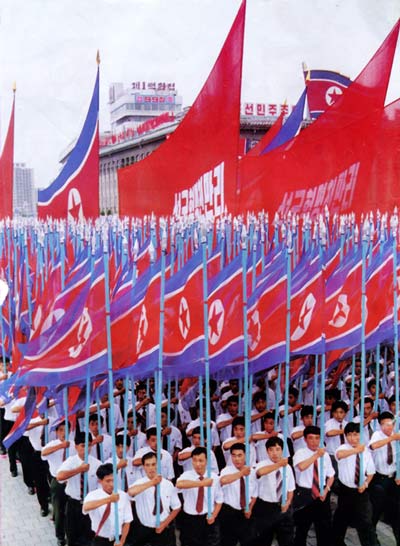 After five successful visits since 2002 we are able to offer visits to more locations than ever. As steam in Korea is running on it's very last leg, do not wait until the last steam has gone or an American politician decides to block any further travel into a fascinating and unique country.

The Democratic People's Republic of Korea (North Korea) is almost off limits to foreign visitors. Those few who were able to visit the country - even six times - include the overseas-editors of the German railway journal "LOK Report", Florian Schmidt and Bernd Seiler of FarRail Tours. During their stays they met with North Korean officials to discuss a number of tour proposals for railway enthusiasts, which ultimately led to the several successful trips FarRail Tours offered in the recent three years. While the very fact that the authorities agreed to foreign visitors exploring parts of the national railways, which are perceived as an installation of military significance, is remarkable, we even managed to include one of the numerous, and hitherto totally unknown, industrial narrow gauge railways in our itinerary as well as lines in areas which have been closed to westerners for more than three decades.

Our new itinerary covers only lines which were not part of any other programme before. In addition we'll see another Mika 0 in service. The tour is designed for the dedicated railway enthusiast, as well as for people who have a general interest in the country. A special event, for sure, is the parade over the Kim Il Sung Square. To complete the feeling of a surprisingly different political system we'll show you the border between North and South Korea as well as the place where the Great Leader, Kim Il Sung was born and the mausoleum were he is presented to the public now.

Please be assured that you can expect absolutely first class pictures with professional managed authentic steam trains. The Koreans know what we want and they will do their very best to make this extraordinary event come true. Our unique tour will give you outstanding value for money.

Our standard-gauge special train in Kwail comprises a Japanese-Mikado, similar to the Chinese Jiefang-type, and approximately five freight respectively five green standard passenger cars. Such compositions have always been, and are still, typical for North Korea's branch railways.

The line from Kwail to Cholgwang is not electrified and rather scenic. It passes through fields and wide valleys. Five photo positions were negotiated and agreed. Anyhow, the experience of former tours is that it might be possible to arrange some more runpasts on the spot. The line is 30 km long and leads north and eastwards. So an early morning departure will provide best opportunities for pictures with steam exhaust and sun on the smokebox on the parts of the line which runs to the east. 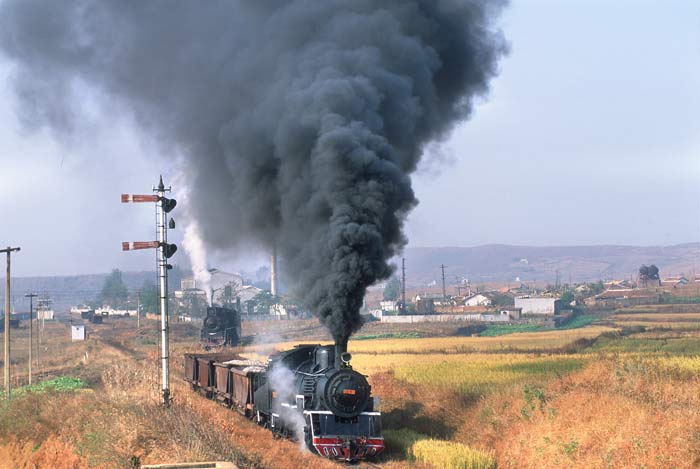 The narrow gauge line near Cholgwang was always out of bound until April 2005. After several long nights with the authorities we now can go at least four kilometres. The line runs through a spectacular country side and after some four kilometres you can get the sea in the backdrop. Light for this position is best in the late afternoon. The line to the ore mine is about 2.5 km long and two Hu Kishi 2-8-0 locomotives provided the shipments of minerals from the nearby mines to the port, which can not be visited.

The branch line from Kujiang to Muksi leads into a scenic side valley. It starts out of Kujang on a long, flat and photogenic bridge which crosses the wide river and passes under the new motorway. Many good positions are possible, five are allowed. The same notes we made about Kwail are valid here as well. We'll try to add some more positions on the spot. As these two lines are totally new for us (and haven't been visited by westerners since the 1950ies) we have planned sufficient time to explore them while taking pictures at the best positions. Sometimes we might have to improvise. Anyhow, the photographic potential is extraordinary, so we'll get some good shots for sure.

Our visit to the capital city of Pyongyang includes a tour on the world-famous metro system. The Pyongyang Metro is reportedly the deepest in the world, more than 150 m below the surface, and as such part of a huge underground system into which the two million people of the capital could be evacuated in case of an attack on the DPRK. The design of some of the stations is breathtaking, thanks to the lavish use of marble, chandeliers, impressive sculptures, carvings, mosaics and other murals. Many of the latter depict the founder of the country, president Kim Il Sung. The names of the stations like "torch", "glory" or "liberation" surely sound exotic to western ears.

Another important mass transit system are the Pyongyang tramways. The cars originate from formerly befriended countries of the European socialist block. A special ride through the grand city of Pyongyang with its monumental socialist constructions and beautiful parks will be a part of our itinerary. 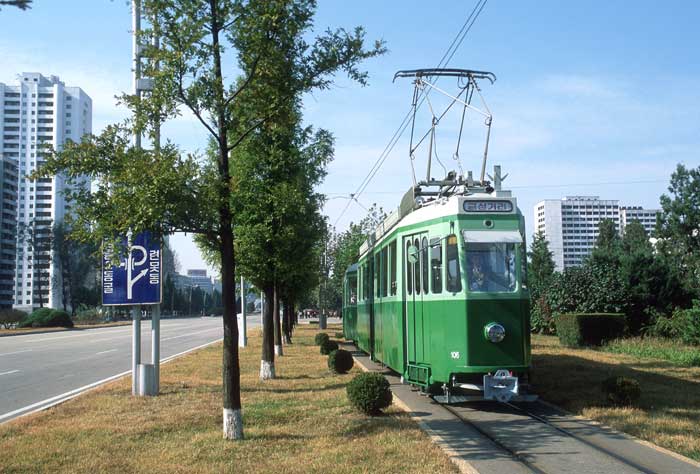 The visit to the Kumsusan Memorial Palace (mausoleum of Kim Il Sung), depends on our behaviour on the first days. The required dress code is a suit plus tie for gents and appropriate clothes for ladies.

Our trip to Beijing will be by international train, surely an opportunity for priceless observations of this rarely visited country. In Sinuiju steam locomotives were spotted during the last two years, for branch line and shunting services. Other than that, various types of the self-built electric "Red Banner"-class as well as several diesels of the Chinese DF4-types or Soviet-made M62 "Taiga Drums" can be seen.

The new dimension of the tour is the visit to such famous events like the parade on the day of the foundation of the Worker's Party of the DPRK and the mass games during the Arirang festival. We will be guests of these events. The mass games are not confirmed yet (they don"t hold these mass games each year) but the training for the parade is already undergoing.

Temperatures are expected to be in the range of plus 5 to plus 20 degrees Centigrade. The autumn season is often very dry and sunny.

The hotel in Pyongyang is a five star hotel, in Kaesong a four star hotel. The hotel in Namphois not known by us personally, we only guess that this three star hotel offers a two star service. Please be prepared that food isn't available in unlimited quantities like in China.

Full board is included, but lunches will sometimes be simple, not to say "basic", especially during special train rides, while dinners are usually sumptuous. Alcoholic beverages are not included in the tour price.

Please note, mobile phones are not allowed in North Korea. You have to hand-over your mobile phone to the officials and will get it back on the last day of our tour. Laptops are allowed. Voltage is 220 V, 50 Hz in both countries, North Korea and China. An adapter for the outlet is necessary. In the DPR Korea it is not guaranteed that the voltage will be sufficient to recharge batteries in the same time as they normally need. Please be prepared.

Further information about special conditions in North Korea are supplied on request.

The "Land only" arrangement excludes the flight to and from Beijing. Please deduct 605 Euro if you wish a land only arrangement.

Above prices are based on specific bookings with the respective airlines, which, given the limited flights in this class, have to be confirmed well in advance. Your early booking is hence appreciated.